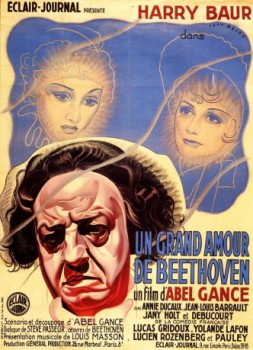 Autre titre :The Life and Loves of Beethoven

Synopsis :
1801, in Vienna, two young women, his pupils, are in love with him. Thérèse de Brunswick's love remains unrequited even though she and Beethoven are engaged for years; Juliette Guicciardi, whom Beethoven loves but who marries a count, regrets that decision, but by then he and Thérèse are engaged. When Beethoven loses Juliette, he moves to the mill at Heiligenstadt; realizing he's becoming deaf, profound depression sets in. He rejects suicide, holding on to remembered sound and to his work, a dedication assisted by Thérèse and others. In later years, we see his devotion to an ungrateful and thieving nephew, his poverty, the isolation of deafness, and the love of friends.